How to use interactive video for eLearning

The growth of video eLearning keeps on accelerating. Using video in your learning experiences provides a more immersive experience and gives your learners more context than is possible with just text and images. Video is also becoming easier, faster and cheaper to produce and edit, and bandwidth has increased. Web technologies have advanced to a stage where interactions can be added over the top and inside of the video frame, which increases the overall immersive experience.

The term interactive video is a bit of an oxymoron. Video is a pre-recorded medium. It's never going to be fully interactive. 'Watching' is a passive verb. While video games are highly interactive, they don’t actually use video, instead relying on 3D graphics generated in real time in response to the user. There might be some pre-recorded material but the bulk of the experience is generated.

But this doesn't mean it's impossible to build great engaging experiences with pre-recorded video.

Approaches to interactive video in eLearning

The screenshots below are from a learning resource on running a meeting that Sprout Labs recently built using the interactive video features in Glasshouse.

There are a few different approaches to how to give your learners choices in interactive videos. Some examples:

Tip: The challenges with interactive video remains bandwidth. Without getting too technical it's not always possible to jump around a video file on all servers, and loading new files is often slow. We have actually found video interactions that involve 'branching or jump interaction' the least useful.

'Hotspots' might appear at certain times in the video. When the learner clicks on one, the video is paused and more information is overlaid on top. In this example, a guide provides further information on how to run a meeting. 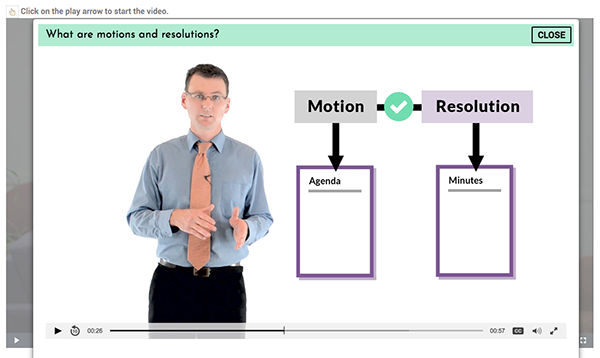 Tip: When learners are engaged with an interactive video experience, it's odd for the medium being used to switch from video to text. They are in the mode of watching. Hotspot interactive video works best if they are video or images.